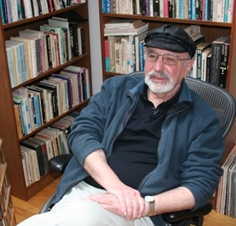 For the story behind the book and a vignette on the author, see the article which appeared in the Seattle P.I. by D. Parvaz. It was later reprinted nationally, appearing in other U.S. papers including the Houston Chronicle, Chicago Tribune, Miami Herald, as well as the Post of Canada.

His old Web site, A Word with You, has garnered numerous awards and attracted more than a million visitors since its inception. It has also inspired two published volumes (A Word with You America). As a filmmaker he produced and directed The Journey, the story of an immigrant's trek to America and Walk Right In, the story of the other Yale.

For more information go to the Author's Media Kit

His work has been informed and shaped by Dr. Celestial Bawdy, the esteemed scientist of human behavior who mysteriously vanished more than 150 years ago, and, after a brief sojourn in the nethersphere, suddenly reappeared on earth to share his life's work with Paros.

An accomplished public speaker, Paros has had extensive teaching and lecturing experience; in the course of promoting his earlier works, he has been interviewed on dozens of TV shows and over 100 radio stations.

A cantankerous septuagenarian, he lives quietly on the periphery of Seattle Washington with his two cats and a son to whom he is an endless source of embarrassment. The cats for all intents have stoically accepted his prurient interests, stirring only occasionally at the occasional reference to pussy.