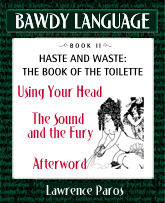 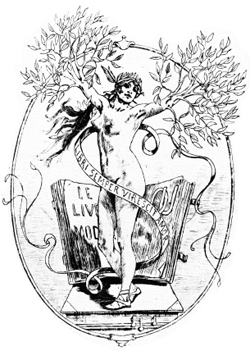 That anyone should pass up the well established colloquial words of the language and have recourse to the Latin, "defecate," "urinate," and "have sexual intercourse," is indicative of grave mental health.

n Medieval times, the Lord in power frequently issued edicts called bans for a variety of purposes, the most important of which was to conscript men for battle. All called were expected to comply. One shirking his duty was considered outside the ban. This made for the French bannir, "to proclaim," labeling him an outlaw, leading to his banishment and making him a bandit, from the Italian bandito.

Over time, the ban evolved from a proclamation to a prohibition. In our culture we primarily ban ideas. Words such as those which make up the body of this book are often the subject for banning, making writers outlaws of sorts.

The lord's banal rights also gave him exclusive control of everything on his estate: the ovens, mills, storage facilities etc., and the right to decree who used them — conditions set forth in the bans. There were bans for everything, even for formal notice of intended marriage, as when they posted the banns. Covering so many situations, and issued with such frequency, the ban came to be considered commonplace or trite. Yet another ban...ho-hum. This explains how those working to ban ideas and works of art today would merely substitute their own banal stuff in its stead.

Equally banal is the senseless bombardment of these words and their cheap exploitation. Knights once raised the flag of their sovereign lord in tribute to him. It was called a banner. The word is now considered a symbol of principles, making for banner headlines and banner years — proclaiming things "leading" or "foremost." These are banner years for dirty words. Never before have they had it so good. The French gave us mettre à bandon, "to put under another's control," hence to give it up. Abandon the principle of freedom of expression to the self-styled lords of morality? Banish the thought. But let us also raise high the banner of taste and creative use of language for all words, bar none.