A sexual reference book like no other
Everything you always wanted to do but were afraid to say
The Book
Samplers
Reviews
The Author
Buy the Book
Mini-eBooks
Free eBooks
Buy "The Gender Gap" mini-eBook for only $1.99 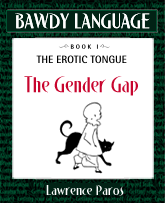 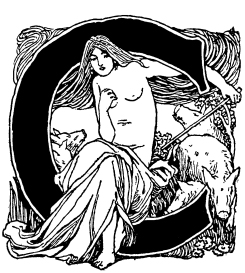 I loved a lass

And she was tall and slender;

I laid her flat

And tickled her feminine gender.

Lexicographers, however, generally avoided any reference to it in their dictionaries, leaving a long-standing gap in the language. Francis Grose's Dictionary of the Vulgar Tongue met it halfway and awarded it four stars, ****, in his second edition in 1788, noting that the word came from the Greek kovvos ("bead" or "trinket") and the Latin cunnus. Then, adding insult to injury, he referred to it as "a nasty name for a nasty thing." Now really! For years, she was denied access to the OED. Only Partridge argued the injustice of her exclusion: "OED gave prick, why this further insult to women?" It wasn't until 1976 that it was finally given an entry of its own.

But even in its formal absence it has occupied a very special place in the English language. Not just "a bawdy monosyllable such as boys write upon walls" (Farmer and Henley) but the venerable monosyllable (pre-1788 — pre-1915).

As Grose reminds us, there may be thousands of monosyllables in the English language, but there is only one that is the definite article (18thC).

However positive and reinforcing it could be, cunt has been a pejorative for women all the way back to the Roman times and the cunnus. According to Partridge, the word was used frequently by soldiers during World War I in such expressions as "You silly (or great) cunt." More recently, Dustin Hoffman called it to our attention while promoting his movie "Tootsie," in which he plays a man playing a woman. Displaying his newly raised consciousness on matters sexual, he noted, "If a man is obsessed with getting things right, he's called difficult. If I were a woman, I'd be called a cunt."

It's not unusual to insult people by identifying them with their body parts. Calling someone a prick is a commonplace insult, but we reserve use of the expression for males of a particular character, and not for men in general. Cunt, on the other hand, is not only a term filled with contempt and disdain, but it is applied indiscriminately, regardless of the person's character, insulting not only the person toward whom the remark is aimed, but all women everywhere.