A sexual reference book like no other
Everything you always wanted to do but were afraid to say
The Book
Samplers
Reviews
The Author
Buy the Book
Mini-eBooks
Free eBooks
Buy "Act One" mini-eBook for only $1.99 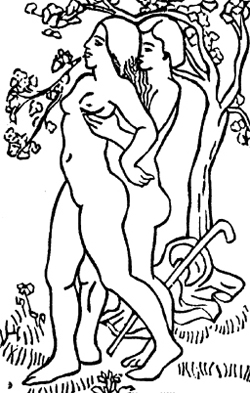 'Tisn't beauty, so to speak, nor good talk necessarily. It's just it. Some women'll stay in a man's memory if they once walk down the street.

Contemporary theatre at its finest. A turgid melodrama in one lascivious act, featuring the sweet young thing and Mr. Right. See him overcome by passion and seized by unbridled lust. Watch the hitherto unsullied damsel fight to retain her honor.

In short, she's a real doll (since c. 1904)-that is, if you don't care about her past. A doll was a common harlot through the seventeenth and early eighteenth centuries, and both doll and dolly occasionally served as a mistress and slattern right through the nineteenth century.

In this corner we have her male counterpart. Ideally, he's tall, dark, and handsome (late 1920s-50s), words that perfectly describe Caesar Romero, who starred in a film with that title in 1941 and who quickly became the standard by which teenage bobby-soxers judged their acned suitors. Earlier, the same words were used by female movie buffs when speaking of Rudolph Valentino, who was really short, dark, and handsome, but apparently ten feet tall to his admirers. More recently, he's a hunk, something akin to the female piece.

There's little else to say. As Stuart Berg Flexner noted in I Hear America Talking, women tend to talk much less about men than men do about women, unless the guy's an out-and-out seducer, of which we will say more later. So for now, let's simply write him off as the boy next door, popularized by Judy Garland who sang his praises in the 1947 film Meet Me in St. Louis. She's hoping he's Mr. Right (c. 1940), until his actions prove her wrong.