A sexual reference book like no other
Everything you always wanted to do but were afraid to say
The Book
Samplers
Reviews
The Author
Buy the Book
Mini-eBooks
Free eBooks
Buy "The Toilette 1" mini-eBook for only $1.99 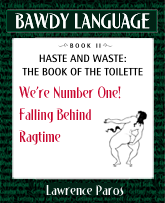 When Nature is calling, plain speaking is out
When ladies, God bless 'em, are milling about,
You make water, wee-wee, or empty the glass;
You can powder your nose; "Excuse me" may pass;
Shake the dew off the lily; see a man 'bout a dog;
Or when everyone's soused, it's condensing the fog.
But be pleased to consider and remember just this-
That only in Shakespeare do characters piss! 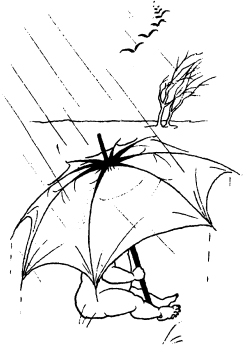 oing with the flow brings us to our very next topic — pissing (17thC). Pissing (17thC) derives from the French pisser via Old French and vulgar Latin. It was Standard English until around 1760, as in "He would not once turn one for a kisse. Every night he riseth for to pisse" (Hazlitt). About the same time it became a popular expression in the United States, a nation with few "pe-ons" and a highly energetic pioneer stock full of piss and vinegar.

Pissing has been received differently depending on the culture. It was anything but number one (nursery term, 19thC) to the followers of Mohammed, who were so repelled by it they chose to squat in the act rather than let a single drop fall on their person. The Hottentots, on the other hand, couldn't seem to get enough of it. The high point of their marriage ceremony came when the priest urinated (c. 1599) upon the bride and the groom.

Here in the West we are generally more pissed off than pissed upon. When you piss people off, you get them angry. President Lyndon Johnson was one who got pissed off frequently. But even he could be selective about it. Queried once as to the reason he retained the difficult J. Edgar Hoover as Director of the Federal Bureau of Investigation, he explained: "I'd much rather have that fellow inside my tent pissing out than outside my tent pissing in."

There have, however, been a few exceptions where piss has been welcome. In the seventeenth century we used piss as a facial cleanser and to remove birthmarks and freckles. Today, it's the critical ingredient in the kinky activity known as water sports.

Though pissing is a universal phenomenon, not everyone can piss well. Some people are notoriously piss-poor. Clemenceau, the French Prime Minister during World War I, pissed and moaned about his prostate, lamenting enviously of Lloyd George, his British counterpart, "Ah, si je pouvais pisser comme il parle." ("If only I could piss like he can talk.")