A sexual reference book like no other
Everything you always wanted to do but were afraid to say
The Book
Samplers
Reviews
The Author
Buy the Book
Mini-eBooks
Free eBooks
Buy "Sticks and Stones" mini-eBook for only $1.99 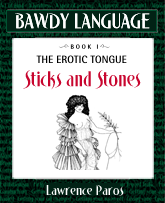 Before the barn-door crowing

The cock by hens attended

His eyes around him throwing

Stands for a while suspended.

Then one he singles from the crew,

And cheers the happy hen

And How do you do again.

Looks can be deceiving. Though the cock appears jaunty and confident, he's anything but cocksure. He may think of himself as a strictly all-male bird, but a close look at his history shows quite the contrary. Not only does this most masculine of birds have a feminine side to him, but, according to the lexicographer of black English J. Dillard, he once denoted exclusively the female organ in the black community of the Southern United States and the Caribbean. This usage originated in nineteenth-century England where women ofttimes used cock as a verb in a passive sense, as to want cocking or to get cocked. From there, it was a natural transition to refer to the female pudendum as a cock.

The male cock's stature has further been diminished by invidious comparisons with other birds, treating its appearance and character with even less respect.

"Esther, have you ever seen a man?" ...
"No," I said. "Only statues." ...
I stared at Buddy while he unzipped his chino pants ... He just stood there in front of me and I kept staring at him. The only thing I could think of was turkey neck and turkey gizzards, and I felt very depressed.
— Sylvia Plath, The Bell Jar, 1963

The cock's rise to the top has not been easy. Early in the nineteenth century a wave of anti-cock sentiment swept the land. It was part of a general purge of all language that was deemed offensive, transforming legs into "limbs" and bulls into "he-cows." Cock suddenly disappeared, not only from private conversations but from the family farm. Poultry farmers referred to their holdings as "boy birds" and "gentlemen fowl." In war, men pulled back the roosters of their guns. Thoroughly chicken about what others might think, the father of Louisa May Alcott, the author of Little Women, changed the family name from the more suggestive Alcox. And throughout all of this, folks had nothing to sustain them but a little rooster-eyed optimism.

Cock has staged a comeback, however. Though it's still not proper to bring him up in mixed company, the average male is cockier than ever. Impartial observers, however, still consider him "for the birds."