A sexual reference book like no other
Everything you always wanted to do but were afraid to say
The Book
Samplers
Reviews
The Author
Buy the Book
Mini-eBooks
Free eBooks
Buy "Let Me Count The Ways" mini-eBook for only $1.99 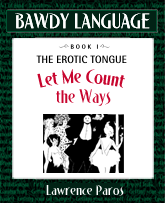 Suppose eating, not sex, were the taboo of our century? Suppose it was illegal for more than two people to eat together and suppose even they had to get a license for it and eat in secret while children were fed alone in dark closets? Suppose our billboards and newspaper ads, movies, and books and art devoted themselves to pictures of food-but never one glimpse of anyone eating?...Wouldn't it result in secret, general passions to try esoteric foods? And wouldn't people like to get together, law or none, and talk about the tabooed subject? 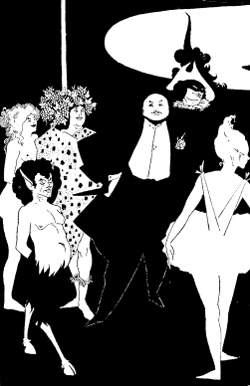 Let Me Count The Ways

ex often takes a turn. It could be a slight turn from the norm, a diversion (from the Latin di and vertere), or a complete U-turn away from that which is normal, a perversion (from per and vertere).

According to Alfred Kinsey, a large number of people treat any kind of sex other than that involving a single man atop a single woman as abnormal. Other groups are less judgmental, considering such varied activity, creative and healthy.

Everyone needs a break from the ordinary and the commonplace. An old blues song celebrated the wife who provided "cornbread for her husband and biscuits for her back-door man."

According to J.L. Dillard (American Talk), both cornbread and shortin' bread were Southern black expressions for "coarse, undistinguished, and routine sex." It was what the French used to refer to as le pain quotidien, "the daily bread" — the act of kind done in a perfunctory manner, as in a longstanding marriage. Biscuits stood for both worldly women and out-of-the-ordinary sexual activity, especially when hot. The cold biscuit (dull, perhaps unattractive, and only a leftover at that) was something else. When woman was serving, the hot biscuit got it on with the biscuit roller, one especially adept at the practice.

More recently, Kinky Friedman of The Texas Jewboys took yet a different approach with "Get Your Biscuits in the Oven and Your Buns into Bed," (1992) thus incurring the wrath of Feminists who found his tastes all too stale. He and his male cohorts, however, can claim a higher motive, their predilection for buns, biscuits, and muffins clearly demonstrating that man cannot live by bread alone.