A sexual reference book like no other
Everything you always wanted to do but were afraid to say
The Book
Samplers
Reviews
The Author
Buy the Book
Mini-eBooks
Free eBooks
Buy "The Dynamic Duo" mini-eBook for only $1.99 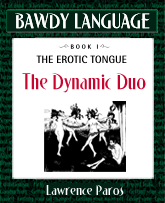 Put a bag over her head

You don't have to fuck the bag. 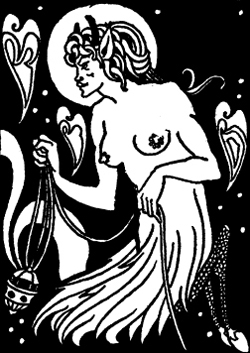 Put a flag over her face

and fuck for Old Glory.

ex as the world's greatest act makes for fine theater, but most people still consider it a game in which competitors with finely honed skills are pitted against each other. The stakes are high, the action fast-paced. A program is essential: you can't tell the players without one.

How you play the game depends largely on how you look at it. Seasoned male practitioners see as its primary objective getting into her pants (mid 20thC), a challenge made all the more difficult by her being in them at the same time. Once in there, i.e., having got it on successfully, he is said to have scored. Points are awarded for both technical proficiency and artistic impression.

Your One and Only

It's all in the approach. We once knew it as the three F's (19thC): fuck, fun, and a footrace, referring both to a wild time and a lewd person. More recently it's been the four-F method (c. 1890): find, feel, fuck, and forget, though we later thoughtfully added '"em" to the expression. Hoping to avoid any controversy, the editors of The American Thesaurus of Slang (1953) coyly recorded the expression as find 'em, feel 'em, frig 'em, and forget 'em.

The game's leading scorer is the legendary assman (mid 20thC). The assman cometh but saith little. A deep conversation consists primarily of "getting much?" or "getting any?" His reputation speaks for itself. His credo: "I've seen more ass than a toilet seat."

Here's Looking at You!

That man has a limited perspective is obvious. It comes from looking at every woman through the hole in his prick (late 19th-20thC). He used to look for a fast filly (early 17thC); today it's the fox (1960s, U.S. black slang) he's after. More likely he'll come home with a dog or a bow-wow (mid 20thC) on his arm.

Even a pig (mid 20thC) isn't out of the question. Though he makes such distinctions, in practice he's quite democratic: "All petticoats are sisters in the dark" (18thC). An equal-opportunity employer, he's not concerned with age. As for older women: "They don't swell, won't tell, and are as grateful as hell" (20thC). His general assessment of most females: "I wouldn't kick her out of bed for eating crackers" (mid 20thC).